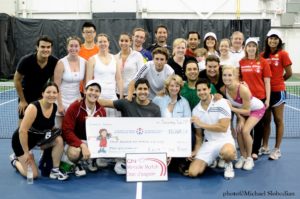 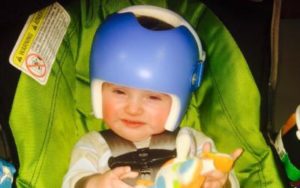 “I Truly Believe He Saved Our Son’s Life Twice.” 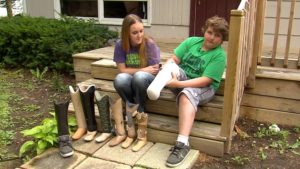 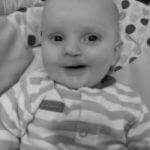 A “Thank You” Letter to Women for Riley

A Beverly Hills plastic surgeon is boosting confidence – but not for the clientele you’d expect.
He is changing the lives of his pint-sized patients.

For parents whose children are born with facial deformities, the thought of paying for surgery can be overwhelming.

To help them, Beverly Hills plastic surgeon John Reinisch works with the Small Wonders Foundation — a non-profit that offers free plastic surgery to families who would otherwise be unable to afford it.

The foundation has helped pay for more than two dozen operations in the past 10 years.

“It’s very hard to see parents and children that can’t get care,” Reinisch said. “I don’t find it work – I enjoy doing it.”

Reinisch works with the foundation, which was started by parents who had insurance that covered his services, like Julie Reisz.

Her daughter Rocky Reisz had a Nevus — a large dark colored mole that occurs in about one in every 20,000 births. She had it removed from the back of her head, neck and back when she was a baby. She has had five surgeries.

“Dr. Reinisch was such an incredible doctor that I immediately wanted to give back,” Reisz said.

Rocky, now a healthy 13-year-old, volunteers with other teens on a junior council raising money for Small Wonders.

“It was kind of a way of giving back from my surgeries,” Rocky said.

Like Rocky, Liam Chao, of Calabasas, was also born with a Nevus.

“I think we grieved the ‘normal’ baby we thought we were going to get,” Liam’s mother, Jennifer Chao, said.

Doctors told Liam’s parents that he could develop cancer if the Nevus was not removed.

“I was so scared for him because we didn’t know what was going on or what the future held,” Jennifer Chao said.

Liam’s parents could not find a doctor in their HMO insurance plan that they trusted with such a delicate surgery, but knew they could not afford it on their own.

The Small Wonders team raised money for Liam to have the first of five surgeries. He eventually needed a skin graft and tissue expander.

Now at 5 years old, Liam is doing great, and his family is forever grateful to Reinisch and the Small Wonders team.

“They changed our life so much,” Chao said. “What they’ve done for us is something we’re never going to forget.”

The experience has inspired Liam to want to give back and he says he wants to be a doctor when he grows up.

“Because people did surgery on me and I really liked it, so now I want to,” Liam said.

To learn more about the Small Wonders Foundation, visit the website here.

Russian family travels to Menlo Park for ‘gift of hearing’ 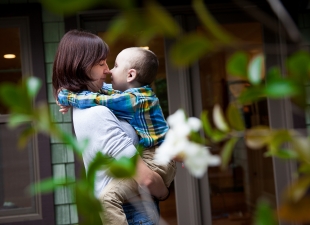 Rimma Krivtsova embraces her 5-year-old son. She traveled with him to California from Russia for an ear reconstruction surgery at the California Ear Institute in East Palo Alto. Photo by Michelle Le.

Seeing Vanya, who was born in Russia and speaks only Russian, enjoying this mash-up of American culture in Menlo Park, was not nearly as strange as the fact that this particular kid was observed enjoying music at all.

Vanya was born with a condition called bilateral microtia, which meant that neither ear was fully formed. His right ear had only about 50 percent hearing ability, and he had no hearing at all in his left ear, which did not have an ear canal.

From the time he was about 5 months old, Vanya had worn a device on his head with a small piece of plastic that helped amplify sound near his functional ear. The device magnified vibrations to help Vanya hear better, but would become less effective as Vanya aged, according to Michael Yurieff, president of Rusfond U.S.A., a nonprofit that raises funds for children in Russia with rare medical conditions to receive medical care around the world.

His mother, Rimma Krivtsova, trained him every day to help him decipher the muffled sounds that he could register.

“Thud, thud” was the sound of a basketball bouncing.

“Clink, clink” was the sound of a spoon banging against a teacup.

But unless something happened fast, all he was going to be able to pick up from his teachers when he started school was “Wah wah wah,” a la Charlie Brown.

Yet his options were limited. The usual treatment for his condition is a series of surgeries that used cartilage from the ribcage to shape an ear, then graft it onto the body, and then later construct an ear canal. But that was a process that would likely take several years and require a number of costly surgeries. Plus, the process couldn’t even start until he was 10 years old, since the cartilage removal process on younger children can cause chest deformities.

However, that all changed in April of this year. Vanya’s mom attended a conference in Moscow hosted by two American doctors from California, who talked about a single operation that used a different technique to both create an ear canal and reconstruct the external ear, without having to painfully remove chest cartilage.

Dr. Joseph Roberson, an inner ear specialist working at the California Ear Institute in East Palo Alto, and Dr. John Reinisch, an ear surgeon based in Los Angeles who had pioneered a new external ear reconstruction technique in 1991, met at a conference 10 years ago and developed an operation combining their two skills, said Dr. Reinisch.

They’ve been doing that operation – called a combined aural atresia repair/microtia reconstruction – together for about eight years, with Dr. Reinish flying to the California Ear Institute in East Palo Alto two to three times a month. They each do more operations separately for patients who do not require both ears to be done at once.

About two and a half years ago, the duo had operated on a girl from Russia, and her family was so pleased with the results that they had invited the doctors to give a presentation to other Russian families of children with microtia. The two doctors presented their techniques and conducted screenings of potential candidates for the operation.

Vanya, who attended the conference with his mother, was screened and found to be a strong candidate for the operation, said Dr. Reinisch, because he had a healthy inner ear and because the condition was bilateral, meaning there was an urgency to prioritize his case. The sooner the doctors could get hearing to Vanya’s brain, the more it would help his development.

Krivtsova said then when she left the conference that day, “It was as if a door to another world had opened.”

Yet when she learned what the operations would involve – a cost of about $113,000 and two month-long trips to California – she said she felt trapped on the threshold of that new world. Her husband is an engineer who works in car repair and she is an accountant, so the kind of money needed for the operation would be extremely difficult for their family to raise.

Then she thought of Rusfond, the nonprofit that raises funds to help Russian children find medical care. The organization raises funds by using Russian national TV to tell the stories of the children it supports, and then invite people to text in donations. After receiving an application from Krivtsova, Rusfond decided to take on Vanya’s case. Soon after, the video aired twice, several hours apart. Before the second showing, Krivtsova said, they had raised the funds needed to move forward with the operation.

Her older daughter, now a university student training to become a speech therapist (partly because she wants to help kids like Vanya, she said), also recruited her friends to text in donations.

With the funds for the surgery, the family began making their preparations for their journey to the U.S. The surgery was set for Nov. 8 at the California Ear Institute in East Palo Alto, which is the only place in the world he could get the specialized operation, said Dr. Reinisch.

Yurieff, president of the U.S. branch of Rusfond, and logistics coordinator for the families seeking medical treatment, said Krivtsova and Vanya arrived in New York City several days before the operation. They stayed at the Ronald McDonald House there for several days to overcome jet lag before flying out to the institute.

Then the surgery began. The operation took between eight and nine hours, Dr. Reinisch said. His portion of the operation, the reconstruction of the external ear, started with a plastic mold for the ear, which he covered with skin grafted from other parts of the body. Dr. Roberson, meanwhile, created an ear canal by drilling a cylinder into the bone, lining it with skin from the scalp, and making an eardrum.

After the operation, though, Vanya couldn’t stay at the California Ear Institute since it is not a hospital and cannot host people overnight. Yurieff learned that the Ronald McDonald House at Stanford requires that the children it serves be patients at Lucile Packard Children’s Hospital or Stanford Hospital and Clinics, so that was out. Furthermore, after the operation, Vanya could not travel by air for at least a month, given the sensitivity of his new eardrum to any changes in air pressure.

So Yurieff asked the priest of the Russian Orthodox church in Menlo Park to reach out to the community to see if a family would consider opening their home to the mother and child while Vanya recovered from his surgery.

Katya and Dr. Joseph Derrough, parents of Alexander, 7, and Katie, 14, were at the Menlo Park Russian Orthodox church when they heard Rusfond’s request. Dr. Derrough, a physician in obstetrics and gynecology at Kaiser Permanente in San Jose, and Katya agreed that their home would be a good place for Vanya to recover since he would be able to play with their 7-year-old son, Alexander, who even speaks a little Russian.

The hunch was right, according to Krivtsova. She said having another kid around the house helped Vanya to “come back to happiness” after the surgery – to feel more like a child rather than a patient.

“I think that’s a wonderful thing to do for a family in need,” Katya said, of opening her home to the visitors. “It gives me a feeling of purpose.”

The families had fun traveling to downtown Menlo Park, including visits to Cheeky Monkey and Cafe Borrone. Vanya and his mom also spent some time in Los Angeles, where he received additional post-operative care.

The two left Menlo Park on Dec. 9, but will return in March for another operation, this time on his other ear. The family is still looking for somewhere more permanent to stay for their next month-long visit.

One evening after the operation, as she went to tuck him into bed, she whispered, “I love you very much.”

Before, he wouldn’t have heard her, but now he whispered back, “I love you too.”

Note: Thanks to Michael Yurieff and Katya Derrough for translating the interview from Russian.

The International Institute for Microtia Repair was created to provide patients, families and medical professionals with the most comprehensive and up-to-date source of information addressing the medical, psychosocial and surgical aspects of Microtia.

Dr. Tahiri will evaluate your condition or your child’s condition via an in-office or skype consultation. He will examine the patient, determine the Microtia grade, evaluate for other associated deformities, review prior examinations and assess hearing potential.

Dr. Tahiri offers advanced treatment for both the cosmetic problems and the hearing difficulties associated with Microtia. The innovative MEDPOR® technique allows him to create a cosmetically pleasing external ear while restoring facial symmetry.

Following Microtia surgery, Dr. Tahiri and our team will help you and guide you through the recovery process of your child. Our aim is to not only provide the best surgical experience but also an uneventful and comfortable post-operative experience.